Not wanting  over-stress my readers by writing about POTUS or my normal political commentary, I decided to just kick back and relax for the long weekend. 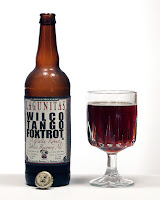 I found a nifty little ale to sample. Not only a good tasting brew, but also a good commentary on the current political situation. The label states “A media-ready Jobless Recovery Ale.” Here, stolen from their home page:

“From our earliest days of striving to make consistently good beer, and instead making beer that ranged from vile, to barely drinkable, to wonderful, to elegant, to questionable-at-best. From being castigated by our West Marin neighbors to finally suffering an ‘eviction’ by our West Marin septic system. From landing in the welcoming arms of Petaluma, and actually getting our beer into bottles, onto the streets, and into the hands of sympathatic beer geeks, to steadily losing less money each month. From all this and more, Lagunitas Brewing Company is emerging as a battle-tested brewery capable of making great beer out of goat’s milk, brambles, and asphalt on the surface of the Moon, if need be.

A new Harvard University study finds that July 4th parades energize only Republicans, turn kids into Republicans, and help to boost the GOP turnout of adults on Election Day. “Fourth of July celebrations in the United States shape the nation’s political landscape by forming beliefs and increasing participation, primarily in favor of the Republican Party,” said the report from Harvard.

Have a happy 4th of July. And remember to take your favorite Democrat to a patriot parade and maybe some fireworks.  And join me in enjoying a glass of WTF