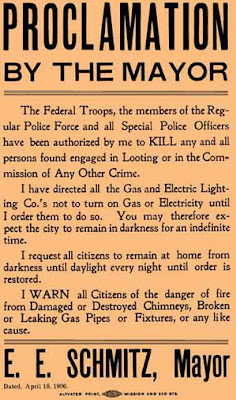 Before I get off on today’s comments (sorry, another Weiner joke?) I was doing some research and ran across this little poster.  Just to refresh your memory, E. E. Schmitz was Mayor of San Francisco during the 1906 earthquake. According to reports, about 9 or 10 people were shot while looting, and then there was no more trouble.

My, how times have changed. Compare this poster with recent statements by Mayor Newsom:

The television and radio campaign will tell immigrants they have “safe access” to public services, including schools, health clinics and – perhaps most importantly – the police, something that local law enforcement officials say is a chronic problem in émigré communities.
“It is a trademark of a criminal predator to convince victims that because of the victims’ immigration status that they – not the predator – will be treated as the criminal,” said Kamala Harris, the city’s district attorney. “We want to remove that tool from the criminal’s tool belt.”

Rampant infusion of illegal immigrants shall certainly follow this campaign. Welfare and crime will increase to the point where legitimate working citizens leave in disgust. I recently received some pictures from another city that has had a severe illegal immigrant problem. What-oh-what will all the transgenders do when their city looks like Detroit?

The planned topic for today’s discussion was the Republican Party. As a party that professes God, Family and the Right to Work without Govt. Intervention, they have once again made the mouthed motto a lie and subversion of the true colors of so many of their “party members” This morning’s headlines blared “Republicans vote handouts for Big Labor!” Yesterday, the House passed the largely non-controversial Military Construction/Veterans Affairs Appropriations (MilCon) bill for FY 2012.

In 2009, Obama used an Executive Order to compel  private contractors to use only unionized workers on Federal projects. Last month, Republicans on the Appropriations Committee inserted language in the MilCon bill to nullify any executive mandate for project labor agreements. Ironically, it was a Republican, union shill Rep. Steve LaTourette, who proposed an amendment to strike out the anti PLA section from the bill. He rounded up 26 other Republicans and helped Democrats preserve Obama’s pro-union discrimination by 204-203! Rep LaTourette gets the Weiner Award of the day. 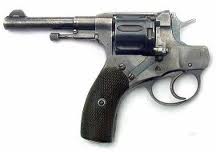 I hereby would like to also provide the ammunition for the Republican sharp-shooters (candidates) that will be using their skills to take pot-shots at the president. It is rumored that the RNC has already issued a new tool for use as part of the Republican Presidential Campaign Welcome Kit. I have a rare proto-type photo of the new device that is supposed to help Candidates take aim at the Nobama initiatives. I guess that gives a whole new meaning to the old saying about “shooting off your mouth.” On the upside, OSHA should love this device as it is almost impossible to “shoot yourself in the foot.”

Remember to support the conservative non-incumbents for our 2nd biannual throw-the-bastards-out day coming to a voter booth near you in early Nov. 2012