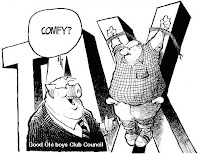 Here comes Hairy Reads 2 foot tall Budget. I just got a look at the stack of paper YOUR senators voted for. Believe me, it is going to be one harry reid, just trying to get through almost 2000 pages of legal mumbo-jumbo.

Porkulous 2011 contains a whole bunch of goodies. Here are a few I found:

On, on and more on. It just never stops. This is so reminiscent of last Christmas and we need you to YELL at the top of your lungs to let these people know that we will not accept these tactics and they will be held accountable!


NO STIMULUS NO OMNIBUS

I really do not know how we can wait for another election to clean house. Just imagine
2 more years of this bull shit
6:35 PM — Update from FOX NEWS .com
In total, thousands of earmark requests are listed. The financial services earmark chart, for instance, lists 220 earmark requests from dozens of lawmakers, mostly in the House, each worth anywhere from $50,000 to $2.4 million. The largest sum was requested by Inouye and his Hawaii colleague Sen. Daniel Akaka for “Bank on USA” demonstration projects” in their state. The projects are designed to give underserved communities greater access to financial institutions.

Elsewhere, the Department of Defense earmark list, mostly requests by senators, is 29 pages long and individual requests more often are worth $2 million to $5 million each. In that list, Inouye’s requests total more than $159 million, including $21 million for a Hawaii Federal Health Care Network. Cornyn’s defense spending earmarks total nearly $16 million.

Get ready now for the 2nd annual throw the bastards out day, coming near you early November 2012