It was a Merry Christmas. Now, give Manhattan back to the Indians

The Day After Christmas, along came blizzards, government Death Squads, and, of course, POTUS Obama the Impotent Pantywaist Surrender Monkey, aka the Prevaricating Usurper or Usurping Prevaricator.

1st, the weather. The East Coast is enjoying a White Christmas, as seen in this MSN.com photo:

Appears that this lady will not be able to ride home in her limo.

﻿ On to more cheerful news, the Whitehouse Mediscare DEATH PANEL CZAR DONALD BERWICK announced over the weekend that doctors will be paid to “counsel” you annually on how to die quickly by encouraging you to refuse treatment for serious, but not necessarily fatal illness. Liberal progressives immediately put out notice that one should not email the “good news” so that the Sheeple that voted the Prevaricating Usurper into office would not be upset during the holidays. The Whitehouse later released a statement blaming the Death Squad on President Bush.

Excuse me, did I read the calendar wrong? Is this really April Fools’ Day? 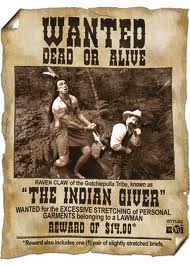 Not to be outdone by any minions, during a recent tribal nations conference, POTUS Obama the Impotent Pantywaist Surrender Monkey endorsed the “United Nations Declaration on the Rights of Indigenous People,” which includes a sweeping declaration that “indigenous peoples have a right to lands and resources they traditionally occupied or otherwise used” but that later were acquired by occupying forces. Academic legal experts indicate that American Indians during the Carter era first drew up plans for reacquisition of lost tribal lands, setting the stage for the U.N. resolution that Obama is embracing. The feasibility study, eyeing 650 million acres of federally owned land in the U.S., was conducted by the Indian Education Institute at Eastern Oregon State, one expert recalled for WND.

According to Fox news this morning, the Whitehouse is hiring bunches of lawyers to defend the mediscare end-of-life mandates.

Happy f…in’ New Year to you too,