Remember those who died for your freedom 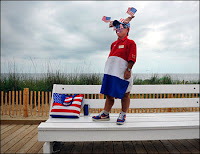 Some stray thoughts, nothing really deep for the weekend. The overriding issue this weekend is that this IS Memorial Day Weekend. This IS a time to remember all who died in the service of this country, whether a World War, Vietnam, Gulf War or the current Iraq and Afghanistan campaigns.

These brave souls died in battle so that you could still have our Freedoms and The American Way of Life.

Here are some of the ways I found people are honoring all who died in the service of this country:

I saved the best highlight for last. Here is the Big Deal of the weekend to honor our Fallen Veterans, those who died for all our freedoms, those who died to give every natural born American an equal opportunity to be President, regardless of race, creed or religion.