By NotaGeek | November 25, 2009 - 6:28 pm |November 25, 2009 Uncategorized
Bigots and racists are all around us. Especially in the Government. Here is a picture of a real, live racist bigot that hides under the skirts of the POTUS Obama The Impotent Pantywaiste.* 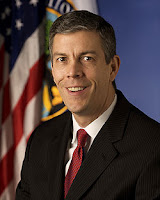 He purports himself to be Education Secretary. His objective of the day is to deny low-income, mostly minority and mostly welfare-dependent children an opportunity for advancement and a chance to get out of the multi-generational welfare trap that has been operated by the Federal Government in Washington, DC for many, many years.

President Bush, while attempting to break the bonds of welfare slavery, was found guilty of offering taxpayer-funded scholarships to attend private or parochial schools in the District of Columbia.

In addition to exceptionally low educational performance and excessive violence, the D.C. public schools are the most expensive schools per student in the United States. The Education Department’s 2008 Digest of Education Statistics shows that for the 2005-2006 school year, $18,339 was spent per pupil per year for average daily attendance – more than double what it costs a child to attend a private school through the D.C. Opportunity Scholarship Program.

However, U.S. Education Secretary Arne Duncan says no more low-income, mostly minority children will get taxpayer-funded scholarships to attend private or parochial schools in the District of Columbia. No room for freedom of choice or freedom from government enforced slavery to the failed systems of the past here!

It appears that U.S. Education Secretary Arne Duncan feels it is better to have our underprivileged be under-educated and enslaved to the Democratic Socialists for more generations.

* Not my description, see earlier posts for proper credit to the authors