Eagleburger came up with  great line to describe our POTUS Obama the Impotent  Pantywaiste.*  Unfortunately, he is wrong and misguided. Not only does POTUS not take action against Iran and North Korea, not only has he not supported our troops, he has not stood against the Russian Communists who announced development of a new missile weapons system after he so “graciously” kissed their ass by agreeing to throw Poland under the bus by canceling our defense missile system.

So, let’s see now…
No support for our troops
Let Pakistan fight Taliban and AlQueda
Send home most of the terrorists in Gitmo, bring the rest to the US so the ACLU can represent them at our expense and guarantee them Constituitional Rights in court
No support for Israel, but give money to Hamas in Palestine.
Never justify what he does, only attack anyone who questions him.
Destroy our corporations with government control
Spend us into oblivion.

POTUS Obama the Impotent  Pantywaiste is not rolling over or playing dead. He hates America, and all we stand for. Just look at the communists, socialists, liars and cheats he has surrounded himself with. Look at this spending spree, guaranteed to destroy our currency, economy and our country.

He knows damn good and well what he is doing.
WHAT HE IS DOING IS GIVING AIDE AND COMFORT TO THE ENEMY

This is TREASON, plain and simple. He needs to be thrown out of office and treated like the traitor he is.

POTUS Obamas the Impotent Pantywaiste received the Nobel Peace Prize. Why? They said as an encouragement to do better, and for having kissed Muslim ass.

Hey, If this POTUS can’t even get an Olympic event for his favorite corrupt city, how the hell can he be a “super international negotiator” for our country?

Why did Europe bother to send a message to the US? We the people can’t hear you. We are too busy routing out corruption and doing our best to throw out the Stalinistas and Marxists that are trying to destroy our country. Why don’t y’all just go back to your welfare line and shut up. We threw out King George, now we are going to throw out King Obamus, his Czars and his minions Pelosi, Reed, etc. 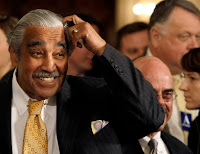 Some people are so corrupt, it amazes even them when they get away with it. Rangel, caught here in one of his more lucid moments, credulously looks on as the House once again sweeps his misdeeds under the rug, and back to a committee controlled by dimocrats who have received campaign contributions from him. Certainly, nothing is amiss in that committee! 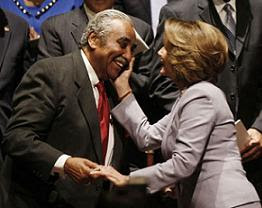 Here, Pelosi reminds Rangel to be a “good boy” and do her bidding. What say you, “boy”, are you happy to be her corrupt little oreo cookie? Just wait, one of these days she will be done with you, then off you go to jail for all your corruption and theft from the American voters.

Our POTUS Obamus the Impotent Pantywaiste once again lives up to his esteemed titles ordained him by the British Press.

How can POTUS be such a shining example to the poor and aspiring young ones with skulls full of mush, you ask.

2. Use your best Door-to-door Encyclopedia Salesman Pitch to the Olympics Committee outlining the benefits of doing business with Chicago Gangsters, Thugs and Political Hacks.

3. Demonstrate your high quality skills and International Prestige by allowing the President of the United States of America to let his chosen city come in last in the judging.

Way to go, what an example you have set for all, Mr. POTUS Obamas the Impotent Pantywaiste! Truly a non-entity for all to observe.

it seems that very clueless people at the national level keep trying to further destroy rather than rebuild the Republican party. Look at the endorsement of Dede Scozzafava in NY by the House Republican Leadership. If you do not know who this person is, here’s some info and here is more

There are other signs out there, too. First is the propensity to want to “negotiate” the take over by the Socialist Dimocratic government of our health care system. What’s to negotiate? There is no negotiation here! Throw the proposal and the backers out with the trash.