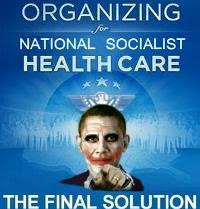 “This used to be America,” argued a protester outside a health-care town hall meeting

in Reston, Va., after a security officer threatened him with arrest for holding up a sign with a picture critical of Barack Obama.

Get the prescription for reclaiming America’s heritage of liberty – before the what the officer said is true – Joseph Farah’s “Taking America Back,” autographed only at the WND SuperStore.

A video of the town hall held earlier this week by Rep. Jim Moran, D-Va., shows an unnamed protester standing on school grounds carrying a sign that read “Organizing for National Socialist Health Care – The Final Solution” and depicted Barack Obama in the Joker’s makeup.

Officer Wesley Cheeks Jr. then told the protester that even though others were holding signs, his sign was unacceptable because of the depiction of Obama.

“But you got this with a picture,” Cheeks said, explaining why the protester was being singled out from the others. “That’s the difference. This has got a picture on it. That don’t have a picture on it.

“Sir, leave the picture down,” the officer said. “If you put the picture back up, you’ll be charged with trespassing.”

Thank you World Net. If you complain, I understand and will remove this posting.

On Fox News a little while ago: No cola for Seniors for a couple of years.

How did they determine we won’t have inflation for 2 years??

Now, on top of no increase , Social Secrewity is increasing your premiums for medicare.

Let me get this straight —

Obama’s health care plan will be written by a committee whose head says he
doesn’t understand it, passed by a Congress that hasn’t read it and whose
members will be exempt from it, signed by a president who smokes, funded by a
treasury chief who did not pay his taxes, overseen by a surgeon general who is
obese, and financed by a country that is broke.

Last week, I was a potentially dangerous person, I probably am on the right-wing terrorist list that Homeland Security denies keeping.

I am listed as AstroTurf rather than grass roots because I attended a teaparty and almost got into a townhall meeting.

I am a “nazi”, I am unpatriotic, and of course I am a Racist because I don’t want ObamaCare.

Now, according to POTUS Obamus, since I really have a problem with “amnesty” for “undocumented recipients of welfare and medical services and a whole lot more free shit I have to pay for” aka Illegal Aliens, I am now also a ‘Demagogue’

Bet ya thought I was talking about the Senior Citizens, outraged conservatives and independents on crutches and in wheelchairs that are creating rightful havoc at the “town hall” meetings.

No, I was quoting Dimocrats and liberals whose heads are filled with the sound of their own egos screaming in the night.

Cut health care for Seniors, and use the money to buy new private jets (yes, plural is right, as in more than one) for your congressman to fly around in spending your tax dollars.

We need to tell them they will be thrown in the street come election time. If we don’t, we will be, as the POTUS Obamus says, pointed in the right direction, losing lots more jobs and facing rising unemployment.

Trickle up poverty is rapidly becoming a Tsunami heading your way.

Wake up, get your fuzzy little pointed heads out of your butts and throw the bums out.

(CNSNews.com) – Democrats have a warning for Republicans: Angry constituents who berate their congressional representatives at public forums are “dangerous” people.

“These are the sort of excessive displays that breed a backlash,” wrote a Politico.com blogger on Monday. The national press secretary for the Democratic National Committee linked to the Politico item in a mass email on Tuesday, effectively endorsing the blogger’s message.

“Yes, there is now much energy on the right,” Politico’s Jonathan Martin wrote on Monday afternoon, adding “there is danger in such raw passion.”

Guess what, dumbocrats, y’all and Politico can go suck eggs.

While I do feel that texting while driving should be against the law, this is not a function of the Federal Government. This type of “feel-good” legislation only causes further intrusion into areas that are the domain of the individual states under the 10th Amendment. Congress can ban texting while driving for vehicles engaged in interstate commerce, but only to the extent of individual fines or cancellation of licenses to move goods and services across state lines.

Withholding funds from States that do not comply is nothing but further entrenching the current moves towards more federal intervention and nanny-statism.

Word is there is new bill being promoted to require all candidates for POTUS to show their birth certificate beginning in 2012.

This is so much BS. It only diverts from the issue that we need THIS PRESIDENT to show his certificate NOW

There is way too much socialism/communism/fascism being pushed on us. If he won’t do it now, he needs to resign because his denial to cooperate with the people is proof he has something to hide.

In this case, it suggests he is NOT a natural born citizen, is NOT entitled to be President, and all legislation and executive orders signed by him are not valid.